The Hygge Holiday out today

The ultimate festive read has arrived! The Hygge Holiday is the fourth novel from rising star in romantic fiction, Rosie Blake.

The perfect recipe for hygge this autumn: make a hot chocolate, draw the curtains, snuggle under a blanket and read your way to happiness!

We’re thrilled to announce that Rosie Blake has signed with Corvus for two new romantic comedies, and her backlist title How to Get a (Love) Life.

The first book of the deal, How to Stuff up Christmas, will be published in November this year, and sees the heroine, Eve, turning to cooking during the festive period to try and put a relationship behind her. The second book, to be published in July 2016, is How to Find your (First) Husband, which sees a woman trying to find the boy she married in a playground ceremony as a child, fearing he may be the one who got away.

Corvus will also republish How to Get a (Love) Life, Rosie’s first novel, previously published by Novelicious.

Louise Cullen, the acquiring editor, said: "Her first novel is an excellent example of young, smart women’s fiction and shows the talent Rosie has for comedy writing and memorable heroines. A Christmas novel is the perfect next step to bring her to a wider audience and How to Find Your (First) Husband is a masterclass in romantic comedy."

How To Get A (Love) Life: The Launch

Set in the opulent and quirky surroundings of Bar Soho in London, the DA team were welcomed with cocktails, posters and postcards with hilarious quotes from Rosie’s book. The room was packed with familiar faces from the publishing industry and lots of bloggers from the online community.

Rosie gave a wonderfully funny speech in which she thanked her editor, Kirsty, and the team at Novelicious. She also thanked her agent, Clare, and the rest of the Darley Anderson Agency. The celebration was a roaring success – we know Rosie’s book will be one too!

Rosie’s book is out now and available here. She is already no.16 on the Amazon Bestseller list in Love, Sex and Marriage humour! 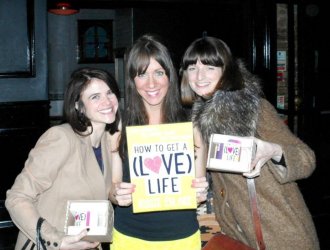 How to Find Your (First) Husband published today!

The hilarious and heart-warming How to Find Your (First) Husband by Rosie Blake is published today by Corvus.

Determined to be the next big thing, Isobel Graves has followed her dreams to LA but finds herself promoting fish markets dressed as a prawn.

So when she sees her childhood sweetheart, Andrew, in the backgorund of a newcast, she's takes it as a sign, embarking in a round the world journey to find true love.

Described as 'full-on funny' by The Sun you will not want to miss this.

How to Stuff Up Christmas by Rosie Blake is published today!

Rosie Blake's gloriously festive novel, How to Stuff Up Christmas, is published by Corvus today!

We are thrilled to welcome Rosie Blake to the Darley Anderson Agency.

Rosie spent several years adapting old classics for pantomime, before turning her hand to writing Women's fiction. Rosie is the author of Ice Ice Baby which was published in the Sunlounger anthology of sizzling summer reads.

Rosie's debut novel, How To Get A (Love) Life will be published by Novelicious Books in January 2014. Please click here for the announcement in The Bookseller. The Darley Anderson Agency will be handling all foreign translation rights in this title.

Rosie Blake (far-left) with the other Sunlounger authors