The Spitfire Sisters Out Today

Margaret Dickinson, The Sunday Times Bestselling author, has done it again with the breathtaking conclusion to The Maitland Triology.

The Spitfire Sisters will have readers soring with Dickinson's classic mix strong female characters and intricately woven relationships, all set against a beautifully constructed backdrop. 'Family and friendship mean everything under the darkening skies of wartime Britain.'

Out now in hardback!

Magnificent Margaret Does it Again

Sales of The Brooklands Girls went straight into the Bestseller Lists at No 14 after only 3 days sales.

The Brookland Girls is the sequel to her 2018 Bestseller The Poppy Girls. And the second is a trilogy featuring The Maitland family. Which will conclude with The Spitfire Girls in 2020.

Many congratulations Margaret on your magnificent career and on this most recent success.

Margaret Dickinson shot into the Top Ten after her first full week of sales with Daughters of Courage.

This is the 2nd novel of Margaret's that has gone into the top ten after the first full week of sales.

The first book to do so was the prequel, The Buffer Girls!

Fairfield Hall is No.9 on Sunday Times Bestseller List!

Fairfield Hall by Margaret Dickinson Is Out Now!

Ruthlessly ambitious Ambrose Constantine is determined that his daughter, Annabel, shall marry into the nobility. A fish merchant and self-made man, he has only his wealth to buy his way into society.

When Annabel’s secret meetings with Gilbert, a young man employed at her father’s offices, stop suddenly, she learns that he has mysteriously disappeared. Heartbroken, she finds solace with her grandparents on their Lincolnshire farm, but her father will not allow her to hide herself in the countryside and enlists the help of a business connection to launch his daughter into society.

During the London Season, Annabel is courted by James Lyndon, the Earl of Fairfield, whose country estate is only a few miles from her grandfather’s farm. Believing herself truly loved at last, Annabel accepts his offer of marriage. It is only when she arrives at Fairfield Hall that she realizes the true reason behind James’s proposal and the part her scheming father has played.

Throughout the years that follow, Annabel experiences both heartache and Joy, and the birth of her son should finally secure the future of the Fairfield Estate. But there are others who lay claim to the inheritance igniting a feud that will only reach its resolution in the trenches of the First World War.

Margaret Dickinson has achieved her highest ever chart position on the paperback bestseller list at no. 12!

The Clippie Girls has achieved fantastic success so far, narrowly missing out on the top 10 by just a few hundred copies.

Margaret's legions of fans have joined her in book stores around Lincolnshire and the surrounding counties where she attended signing events throughout February. And will continue to do so for the month of March.

Margaret Dickinson Is In Demand!

Jenny's War by Margaret Dickinson has been fighting its way to the top of the Bestseller List.

Our bestselling regional saga author, the fantastic Margaret Dickinson, has reached No. 23 on the paperback bestseller list, after just 3 days of sales.

Margarets 27th novel, Jennys War, has seen her embark on a wonderfully busy book tour (Jan through until April) of book signings and radio interviews, to the massive delight of her legions of dedicated fans.

Sons and Daughters made the long list for the RNA Romantic Novel of the Year Award, as well as the East Midlands Book Award.

Margaret’s 25th book, Sons and Daughters, proved a huge hit of 2010 going to No6 in the Bookseller Top 20 Fiction Heatseekers list and at No.39 on the overall Bestsellers list.

The East Midlands Book Award is a brand new, independent, annual award taking place this year. It gives an award to the best book of 2010 by authors living in the East Midlands. The shortlist for this will be announced in April.

Keep an eye out on our news page for more information. Or visit Margaret’s website by clicking here.

A huge congratulations to Chris Carter, whose fantastic debut novel, The Crucifix Killer went straight in to No.1 in the Booksellers Top 20 Fiction Heatseekers list. It is a fantastic achievement for a debut novel.

Chris has followed in the footsteps of Margaret Dickinson, who was at No.1 last week with Sons and Daughters. The Agency are thrilled that for two consecutive weeks these two talented authors have occupied top spot.

A blooming lovely idea for a well loved author!

A few years ago at a talk given by Margaret one lady bought her entire backlist there and then - 11 titles! She has collected every one of Margaret's books since.

This same fan is now taking part in a flower festival near Spalding and she has chosen to create her flower arrangements around Margaret's book titles.

Margaret Dickinson's The Brooklands Girls is a Bestseller

After the first full week of sales The Brooklands Girls has jumped into the Top 10.

Another magnificent achievement for an author whose first novel was published 50 years ago.

Congratulations to Pan Macmillan for publishing her so well over many years and to Margaret herself for writing so many magnificent sagas.

The Poppy Girls, by Sunday Times bestseller Margaret Dickinson, is out today.

It is the first in the new Maitland Trilogy, a courageous family saga which follows Pips Maitland as she joins the Flying Ambulance Corps to go the Front Lines during World War 1.

The Poppy Girls is Margaret's 25th book to be published with Pan Macmillan!

Welcome Home by Margaret Dickinson is out now!

Our top 10 bestselling author Margaret Dickinson has released Welcome Home - out to buy in shops just in time for Valentine's Day! 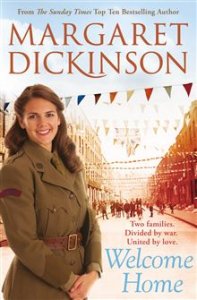 'An outstanding story of love, courage, and family life during World War Two told by an author who knows how to touch your heart - another Margaret Dickinson triumph' Mary Wood, author of Time Passes Time

'The Queen of Saga' Daily Express

Margaret Dickinson is a Top 10 Bestseller!

Margaret Dickinson's Fairfield Hall has achieved Margaret's highest position yet at No. 10!

The Saga Superstar has sold close to 13,000 copies in 10 days, this week alone Fairfield Hall has sold 6,675 copies, not including eBooks.

Fans of Margaret Dickinson's books have been flocking to her signings and supermarkets have had to restock their shelves after selling out after only a few days. 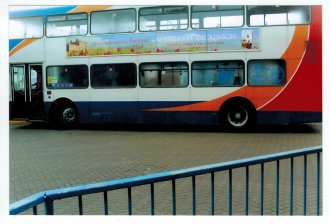 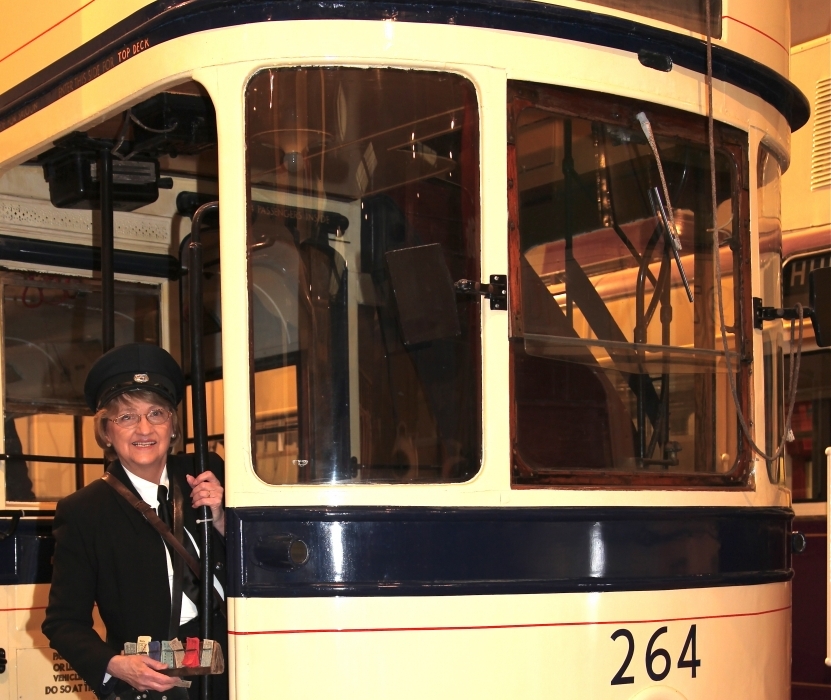 Margaret Dickinson's book The Clippie Girls was inspired by the experiences of tramway platform staff in Sheffield during the Second World War. Therefore it seemed fitting that Margaret should be present at the Crich Tramway Village for their popular annual Easter weekend 1940s event, to meet her fans and experience a taste of what life was really like during the Blitz for the characters in her latest book.


The Clippie Girls, which was released on February 7th, tells the story of a beautiful tram conductress who is working on a tram during the Sheffield Blitz. Author Margaret did a considerable amount of research into creating an authentic backdrop for her story, and the actual inspiration for her latest publication came from a visit to Crich, where she saw a picture of a bombed-out tram during the war. This set her thinking about telling a story based on the staff’s experiences, and this book is the result.


The Clippie Girls is the 29th book release from Margaret Dickinson, it was an instant hit, it is still in the bestseller chart after 11 weeks. The Clippie Girls reached number 12 in the mass market fiction chart and her whose previous books have sold an impressive half a million copies to date.

Fantastic news for Margaret Dickinson who once again proves herself to be one of the UK's top 20 bestselling authors with The Clippie Girls. Congratulations Margaret!


Set in wartime Sheffield, The Clippie Girls tells the story of a young and beautiful tram conductress who is on duty during the Sheffield blitz.

Speaking to The Star, she said: “I was at Crich Tramway Museum where I saw one of the bombed out trams. Straight away I started thinking what if a girl had been working that night? That was my inspiration.”

Margaret's books have so far sold over half a million copies globally.

The Clippie Girls marks Margaret's 20th year with her publishers Pan Macmillan and her 29th book in total. She is celebrating this by embarking on her longest book tour to date.

Massive congratulations to Margaret Dickinson on the success of her latest publication.

Forgive and Forget, published on the 4th March, spent two weeks on the bestsellers list and went to No. 1 on the Booksellers Top 20 Fiction Heatseekers List. Margaret's latest title was also part of WH Smith half price Guaranteed Great Read (or your money back) promotion.

Margaret Dickinsons latest novel, Sons and Daughters has shot straight in at No6 in the Bookseller Top 20 Fiction Heatseekers list and at No.39 on the overall Bestsellers list.

At the age of 25 Margaret Dickinson began to live her childhood dream of becoming a writer, with the publication of her first novel, Pride of the Courtneys. After the publication of seven more novels, Margaret took a seven year break. However in 1991, with some encouragement from her husband, Margaret picked up her pen again and started to write. She soon found Darley Anderson, renowned for his commercial bestselling successes, who championed her to write a new regionally based saga with strong central female characters. Since this point there has been no looking back.

Margaret's recently completed her latest title, Sons and Daughters, is her 17th book to be published with Macmillan UK, and 25th overall.

To promote this novel, Margaret has embarked on a promotional tour, where she is visiting 28 book shops across the UK. The tour kicked off to a great start in Skegness, on the 5th of March. Margaret moved on from here to Lincoln, where over 200 loyal fans were waiting eagerly to greet her, armed with books for her to sign and over 300 copies of Sons and Daughters were sold.

'When it comes the writing and promotion of her wonderful Sagas, Margarets talent and professionalism is as good as it gets. It's been a real privilege and pleasure to be her Agent.' Darley Anderson

The Darley Anderson Agency are immensely proud of Margaret Dickinson, whose latest novel, Sons and Daughters has gone to No.1 in the Booksellers Top 20 Fiction Heatseekers list. After the first three days, Margaret's 17th saga had gone straight in at No.6 and after Margaret's fantastic promotional tour of bookshops across the UK, Sons and Daughters rocketed into prime position.