Dave Rudden's Twelve Angels Weeping is published today! A collection of twelve chilling stories about the villains of the Doctor Who universe, Dave's novel is published by Penguin Random House and is available in all good bookshops.

The Forever Court in the USA

The second novel in the award-winning Knights of the Borrowed Dark series is out in the US today!

Knights of the Borrowed Dark wins

We are thrilled that Dave Rudden's debut novel Knights of the Borrowed Dark has won the Most Read Award at the School Library Association Great Reads Awards.

Instead of a trophy, the students gave him a lightbulb as a nod to one of the most memorable parts of the story.

The ‘GRA’ award was set up by a group of school librarians. The aim of the award is to highlight new authors and diversify the reading of young adults.

Dave Rudden’s action-packed and powerfully imagined Knights of the Borrowed Dark has been chosen as the UNESCO Dublin City of Literature’s Citywide Read 2017!

This reading initiative is organised by Dublin City Council’s Public Library Service as part of its UNESCO City of Literature programme with the aim of encouraging children to read for pleasure.

Dave was honoured and delighted to be chosen, adding, “This is the city that taught me how to write, and I owe so much to its vibrant, friendly and supportive literary community. I can’t wait to share KOTBD with Dublin’s young readers and help them find stories of their own.” 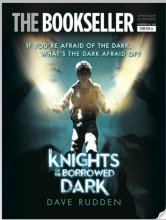 We are so excited and proud to see the cover of Dave Rudden’s début Knights of the Borrowed Dark revealed on the front of The Bookseller today.

Puffin’s biggest Middle Grade launch of 2016 is the first book in a new series about Denizen Hardwick, an orphan boy who discovers he is part of a secret army that protects the world from a race of shadowy monsters.

‘Scary and funny – my two favourites. Dave Rudden is more than a rising star, he is a shooting star.’ Eoin Colfer

#KOTBD is available for pre-order here and published in the UK on April 7th. 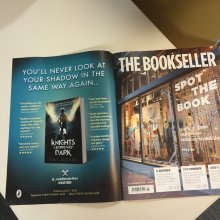 You can also follow Dave on Facebook at Knights of the Borrowed Dark, and Twitter @d_ruddenwrites and keep up to date with all the exciting news as it’s revealed on #KOTBD.

The Endless King is published today

The final novel in Dave Rudden's epic Knights of the Borrowed Dark trilogy, The Endless King, is published today!

This award-winning series is not to be missed, for adults and children alike. Sharp, funny and filled with action, it is particularly good for kids who might be too young for Buffy but are already outwitting you. Don't just take our word for it, see below:

The Forever Court out today!

The outstanding second book in the Knights of the Borrowed Dark trilogy is out in the UK today!

In The Forever Court we return to young and reluctant hero Denizen as he tries to adjust to life in the Order and understand the new and strange powers he acquired at the end of the first novel, Knights of the Borrowed Dark, which won the Specsavers’ Children’s Book of the Year 2016 at the Irish Book Awards.

The Forever Court will be launched by former Irish Children’s Laureate, Eion Colfer on Friday 7th April at Easons in Dublin.

French won the Best Crime Novel for her bestselling thriller The Trespasser. The Trespasser is Tana's 6th book in the Dublin Murder Squad, it went to No 2 in the New York Times Bestseller List.

Dave Rudden won the Best Children's Book of the Year Senior for his fantastic and fantastical debut Knights of the Borrowed Dark, the first in a gripping trilogy.

The astonishingly assured debut novel from Dave Rudden, Knights of the Borrowed Dark, is published by Puffin today. It is the first in a middle-grade fantasy trilogy from the Irish author which was snapped up by Ben Horslen, Editorial Director at Puffin, in a six-figure pre-empt.

Denizen Hardwick doesn't believe in magic - until he's ambushed by a monster created from shadows and sees it destroyed by a word made of sunlight. That kind of thing can really change your perspective.

Now Denizen is about to discover that there's a world beyond the one he knows. A world of living darkness where an unseen enemy awaits.

Fortunately for humanity, between us and the shadows stand the Knights of the Borrowed Dark.

Unfortunately for Denizen, he's one of them...

We are so thrilled to welcome début author Dave Rudden to the Darley Anderson Children’s Book Agency.

The Borrowed Dark is the first in an 11+ fantasy adventure trilogy about Denizen Hardwick. On his 14th birthday, Denizen is summoned from the orphanage he grew up in by a mysterious aunt he never knew existed. It becomes immediately obvious that there is more to this world than Denizen ever imagined and he soon finds himself among the Knights of the Borrowed Darkness, an ancient order that protects the world from the dark realm of the Tenebrae and their powerful master, the Endless King.

Dave is twenty-six years old and lives in Dublin where he is working on books two and three of the trilogy.

Welcome to the agency, Dave, we are so excited to have you on board!