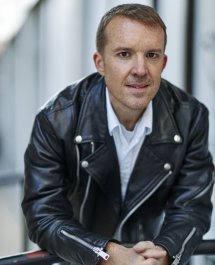 Stephen Spotswood is an award-wining playwright, journalist, and theatre educator. He makes his home in Washington, DC with his wife, young adult author Jessica Spotswood, their cat, and an ever-growing collection of books.

New York City, 1945 - Willowjean “Will” Parker has been the assistant to famed detective Lillian Pentecost for three years. A teenage runaway who spent her adolescence working for a traveling circus, Will now uses her unique set of skills to track down leads, corner criminals, and act as the right-hand woman to Ms. Pentecost, who is battling multiple sclerosis.

Knowing she may become lead detective sooner rather than later because of Ms. Pentecost’s illness, and unsure she has what it takes, Will does her best to cover up her doubts with a hardboiled bravado she’s picked up from dime-store detective novels.

On the surface, the Collins case looks like any other high-society murder. Ms. Pentecost has cracked dozens of them. But those previous cases didn’t include messages from the dead, a blackmailing spiritualist, or Becca Collins - the beautiful daughter of the deceased, whom Will quickly starts falling for.

When the spiritualist turns up murdered the day after “channelling” Will’s dead mother, Will becomes the prime suspect. To make matters worse, her relationship with Becca may have made her the killer’s next target. Will is second-guessing her every move, scared she doesn’t have what it takes to be a real detective and that she’s nothing more than a runaway circus girl playing a part.