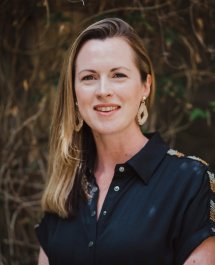 Sophie Cousens started her career in television, where she produced, among other things, The Graham Norton Show, Big Brother, Ant and Dec and Russell Howard’s Good News. In 2015 Sophie won the LoveAtFirstWrite competition, run in partnership with Corvus and LoveReading with her debut novel How to Get Ahead in Television. The book was nominated for a RoNA in the category of Best Romantic Comedy.

Her latest novel This Time Next Year is due to be published by Arrow as an ebook in August 2020 and in paperback in October 2020. Ahead of publication, rights have already been sold in Germany, Russia and the US.

Sophie currently lives in Jersey where she now writes full time. She lives with her husband Tim and has two small children who keep her occupied with important questions such as 'but did Cinderella have a toothbrush? She yearns for a time when she will be able to add a miniature dachshund to the party.

This Time Next Year

Get ready to fall for this year's most extraordinary love story.

Quinn and Minnie are born on New Year's Eve, in the same hospital, one minute apart. Their lives may begin together, but their worlds couldn't be more different. Thirty years later they find themselves together again in the same place, at the same time.

What if fate is trying to bring them together? Maybe it's time to take a chance on love...

How to Get Ahead in Television

Poppy Penfold thinks she’s found the job of her dreams when she wins an internship at the UK’s biggest production company, RealiTV. But there’s a problem – there are two runners on the placement and only one job at the end of it. Her competition is Rhidian Drummond; highly competitive, irritatingly confident and infuriatingly good-looking…

Poppy and Rhidian must prove themselves on a range of TV shows such as Can Your Dog Do Your Job?, Changing Grooms and Strictly Come Prancing. With her parents dead-set against the idea of a career in show business, this is Poppy’s one chance to show she can make a go of it.

Unfortunately for Poppy, she’s not very good at a lot of the things a runner needs to be good at, namely: driving, getting people the right coffee, dealing with drunk and abusive celebrities, comforting comedians on the brink of a breakdown and capturing rampaging glitter-encrusted horses… As Poppy chalks up disaster after disaster, Rhidian can seemingly do no wrong and Poppy despairs she will ever win the job. Moving to London, working in TV, living with cool hipster flatmates - none of it turns out as Poppy expected, but then when is life ever what you expected?