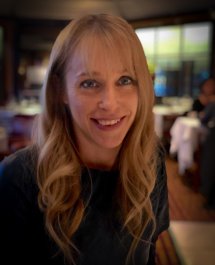 Nicola Gill lives in London with her husband and two sons. At the age of five, when all of the other little girls wanted to be ballet dancers, she decided she wanted to be an author. Her ballet teacher was very relieved. The Neighbours is her first book.

Some women have it all. Others are thirty-four, renting a tiny flat alone because they recently found their long-term boyfriend in bed with their boss. Unfortunately, the latter applies to Ginny Taylor. Single and jobless, Ginny is certain her life can’t get any worse. But then she encounters her downstairs neighbour for the very first time...

Cassie Frost is a woman who had it all – she was a once-loved actress, but a recent stint on reality TV has rocketed her to online infamy. She’s suddenly become a national hate figure – and she desperately needs a new publicist. And Ginny is a publicist who desperately needs a job... but can she be persuaded to work for the uber-difficult, excessively prickly woman that lives below her floorboards?

Ginny and Cassie are two very different women, but they have a lot more in common than they’d care to imagine (or admit). And when their worlds finally collide, they realise that appearances can be deceiving, and that one woman’s catastrophe might be another’s inspiration.

This sparkling debut is a breath of fresh air with real heart and a powerful emotional punch. A funny, honest and moving exploration of life, love, friendship and navigating the emotional rollercoaster of your thirties… and beyond. Perfect for fans of Holly Bourne, Dawn O’Porter and Sarah Haywood’s The Cactus.