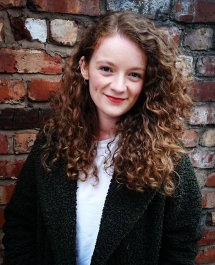 Mary Hargreaves has been writing stories in notebooks since she was seven years old. She spends most of her days in perfectly normal situations, imagining the most hilarious and awkward outcome. She is never without a book in her hand, and has spent her entire life in awe of people who put words on pages. Mary has a Master’s degree in Clinical and Health Psychology and works in research. She lives in Manchester City Centre with several dead potted plants, her boyfriend and the imaginary dog he keeps promising her.

This is Not a Love Story is publishing with Trapeze, Hachette, in the UK (Phoebe Morgan is the editor).

This Is Not A Love Story

Maggie Gardiner isn’t good enough. She had six glasses of wine at a work conference, woke up covered in curry and has accidentally ended up living with the boring guy who was supposed to be a one night stand. Something has to change.

Every other twenty-something on Instagram seems to have their sh*t together, so why doesn’t she? And so she makes a list. When she’s ticked off every item, she’ll become Maggie 2.0 – the best version of herself, and the one she wants to be. Won’t she…?

1. Go vegan. It worked for that girl on Twitter.
2. Take up yoga – that woman she hate-follows swears by it
3. Start practicing mindfulness – all those people can’t be wrong…
4. Quit smoking. It’s not 1999.