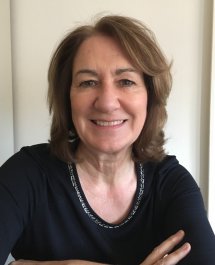 B.A. Paris is the Sunday Times and New York Times bestselling author of Behind Closed Doors and The Breakdown. Her books have sold in 37 territories around the world.

She was brought up in England and moved to France where she spent some years working as a trader in an international bank before re-training as a teacher and setting up a language school with her husband. They have five daughters and have recently moved back to the UK.

It’s Livia’s 40th birthday and she’s having the party of a lifetime to make up for the wedding she never had. Everyone she loves will be there except her daughter Marnie, who’s studying abroad. But although Livia loves Marnie, she’s secretly glad she won’t be at the party. She needs to tell Adam something about their daughter but she’s waiting until the party is over so they can have this last happy time together.

Adam wants everything to be perfect for Livia so he’s secretly arranged for Marnie to come home and surprise her on her birthday. During the day, he hears some terrible news. He needs to tell Livia, because how can the party go on? But she’s so happy, so excited – and the guests are about to arrive.

The Dilemma – how far would you go to give someone you love a last few hours of happiness?

A young British couple are driving through France on vacation when they stop at a service station. He runs in to use the restroom, she stays in the car. When he returns, her car door has been left open, but she's not inside. No one ever sees her again.

Ten years later he's engaged to be married; he's happy, and his past is only a tiny part of his life now. Until he comes home from work one day and finds his new fiancée sitting on their sofa turning something over in her fingers, holding it up to the light. Something that would have no worth to anyone else, something only he and she would know about, because his wife-to-be is the sister of his missing first love.

As more and more questions are raised, their relationship becomes strained. Has his first love somehow come back to him after all this time? Or is the person who took her playing games with his mind?

If you can’t trust yourself, who can you trust?

Cass is having a hard time since the night she saw the car in the woods. And the driver who was later found murdered.

She’s forgetting everything. Where she left the car, if she took her pills, the alarm code, why she ordered a pram when she doesn’t have a baby.

What she can’t forget is the woman she might have saved, and the terrible nagging guilt...

Or the silent phone calls she’s been receiving since that night. And the growing fear that someone’s watching her.

He has looks and wealth, she has charm and elegance. You might not want to like them, but you do.
You’d like to get to know Grace better.

But it’s difficult, because you realise Jack and Grace are never apart.

Some might call this true love. Others might ask why Grace never answers the phone. Or how she can never meet for coffee, even though she doesn’t work. How she can cook such elaborate meals but remain so slim. And why there are bars on one of the bedroom windows.